On a gray October morning, Jack Hagop Semerdjian laced up his sneakers and took his place among the over 10,000 runners competing in the 2014 Scotiabank Toronto Waterfront Half-Marathon. Over the course of the grueling 21 kilometer (13 mile) run, each participant had an idea that kept him or her going. For some, it was the face of a loved one; for others, it was the satisfaction they would feel once they crossed the finish line. But for Jack, it was the knowledge that he was doing his part to help Armenians in need. On that day, Jack was running to support the AGBU Humanitarian Emergency Relief Fund, which provides aid in the form of medical services, educational programs, food distribution and relocation assistance to Syrian Armenian families. Since April, he had been training for the half-marathon and raising funds and awareness about the plight of the 15,000 Syrian Armenians who have been forced to flee their homes and the thousands more whose lives have been upended by war. By the morning of the marathon, Jack was running with an extra spring in his step, knowing that he had raised $2000 that would have an immediate positive impact on the lives of Syrian Armenians.

“This was my first 21k race and it was a big challenge for me, but all I hoped was to raise enough to make a difference and support AGBU and its fundraising efforts as much as possible. Every dollar counts,” said Jack.

Jack’s involvement with AGBU long precedes his half-marathon. As a boy growing up in Toronto, he played in an AGBU basketball league, and as an adult, continued his involvement as a basketball coach. In 2009, Jack went one step further and took on the role of chairman of the AGBU Sports and Youth Committee (SYC). Outside the realm of sports, he has been involved in SYC’s collaboration with the Young Professionals (YP) Toronto chapter to host a Christmas Party fundraiser, which, for the past two years, has donated its proceeds to Syrian relief.

“AGBU has been a part of my life since childhood and my association with the organization has been amazing. I have had the opportunity to see AGBU’s positive influence first hand in our community’s youth and now participate in the global reach of the organization,” Jack says.

Are you planning to participate in your own marathon, half-marathon, bike-a-thon or walk-a-thon? Follow in Jack’s footsteps and consider asking your family and friends to sponsor you in support of the AGBU Humanitarian Emergency Relief Fund for Syrian Armenians or another AGBU project that speaks to you. You’ll be making a difference in the lives of thousands of Armenians who face an uncertain future.

Learn about  how you can fundraise for AGBU programs and make a difference in the lives of hundreds of thousands of Armenians across the globe. 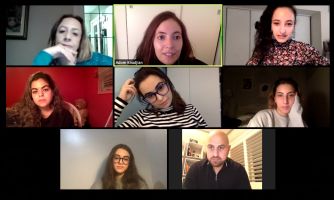