Toronto AGBU’s Christmas Get Together 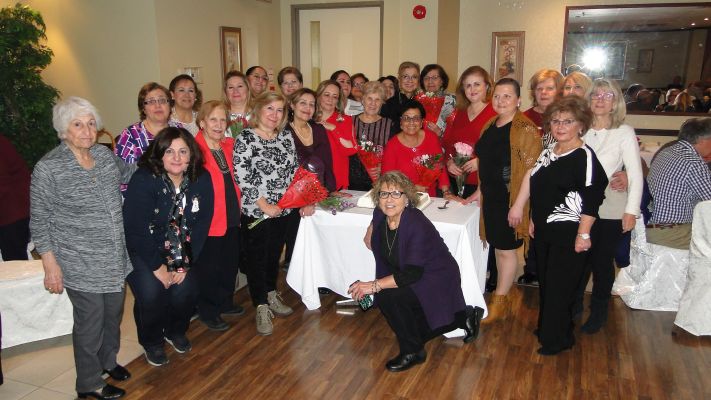 On the evening of December 11th of this year, in one of the more intimate and gloriously decorated reception rooms of the Toronto AGBU Centre, a group of gung-ho AGBU members happily met each other for dinner and a lively time. The upcoming joyous Christmas season brought cheer and contributed much to the festivities.

The atmosphere is always crackling with excitement when AGBU hosts an event but this was a special dinner for many reasons. In addition to the featured meal of the night, Manti, a favourite and delectable Armenian dish, the venerable volunteer AGBU chefs had also brought to the table some other delicious specialties of Armenian cuisine. In gratitude for their work over the years, this particular group of talented cooks were called to the front, presented to the diners one by one as each was offered a bouquet of flowers by the hard working executive director of the Toronto AGBU, Salpi Der Ghazarian. And then there were games to be played and prizes to be won; the action never stopped!

The rest of the evening was spent eating, drinking and visiting with friends. There were reminiscences about the past, talks about the present and speculations about the future. This may have been the last social event at its old premises, nonetheless, we all agreed the future looks bright for the Toronto AGBU especially as it will soon move into its new home at 1 Concorde Gate where we will all certainly meet again. Meanwhile we wish you all a happy and healthy New Year and a very merry Christmas. See you in 2020!
ՇՆՈՐՀԱՒՈՐ ՆՈՐ ՏԱՐԻ ԵՒ ՍԲ. ԾՆՈՒՆԴ